skip to main | skip to sidebar


A lifelong love of sharks led me to create this 4" x 6" watercolor. After receiving my BS in Biology, I worked in the aquarium field for over a decade and spent a lot of time with captive tropical species. Several research projects were designed and conducted using sharks as the subjects. One study involved the operant conditioning of a female sandtiger fondly named “Mama”. She was taught to touch a target and have a buzzer sounded then receive a food reward. She did very well on her trials with 88% success. She was truly a beautiful shark and taught her care takers well - this painting is dedicated in her memory - 'Swim free beautiful lady'.


Glittering ink sparkles on this painting resembling the light reflection off the dermal denticles (scales) of the shark. 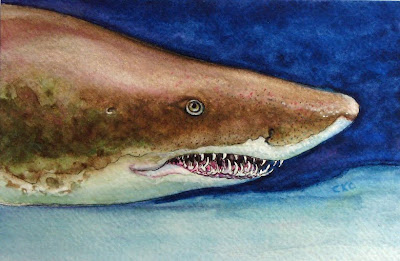 Colleen K Carrigan
Naturalist/Artist with a passion for color! I have devoted many years to animal behavior studies and nature observations. Paintings that I produce include: realistic representations of flora, fauna, seascapes, landscapes and fantasy renderings. My subjects range across nature. I create works in watercolor and archival inks as well as acrylic and occasionally graphite. I thoroughly enjoy producing miniature art cards - ACEO's.